Every year, more than five million older adults and individuals with disabilities utilize a long term care facility, such as a nursing home or assisted living community. However, COVID-19 poses serious risk to this population due to their weakened immune systems.

As a result of their heroic efforts, tens of thousands of residents from these facilities successfully recovered from COVID-19. However, this success came at a heavy emotional cost: both staff and residents adhered to strict social distancing and visitation guidelines that isolated them from their communities and prevented family and friends from providing in-person support.

The American Health Care Association and National Center for Assisted Living (AHCA/NCAL), which represents more than 14,000 nursing homes and assisted living communities nationwide, retained our firm to encourage communities to rally around long term care residents and workers at a time when they needed it most.

Given the gravity of the situation facing long term care facilities, urgent action was critical. We built a national strategy to drive awareness to the situation’s severity among key decision makers and influencers with an urgent call to action to send reinforcements.

To secure assistance in the form of funding and resources, including additional staffing, PPE and COVID testing, we launched a surround-sound campaign that included a mix of earned media combined with targeted digital and television advertising to drive our message directly to officials in the White House, U.S. Department of Health and Human Services (HHS), Centers for Medicare & Medicaid Services (CMS), Federal Emergency Management Agency (FEMA) and Congress.

We employed an “all-of-the-above” communications strategy to drive our push for resources, including:

As lawmakers began discussions around COVID-19 relief funding, we launched SaveOurSeniors.org detailing support needed for nursing homes that we used for tightly-targeted, geofenced digital advertising to drive traffic and engagement to federal policymakers with a call to action to send urgent funding and resources. 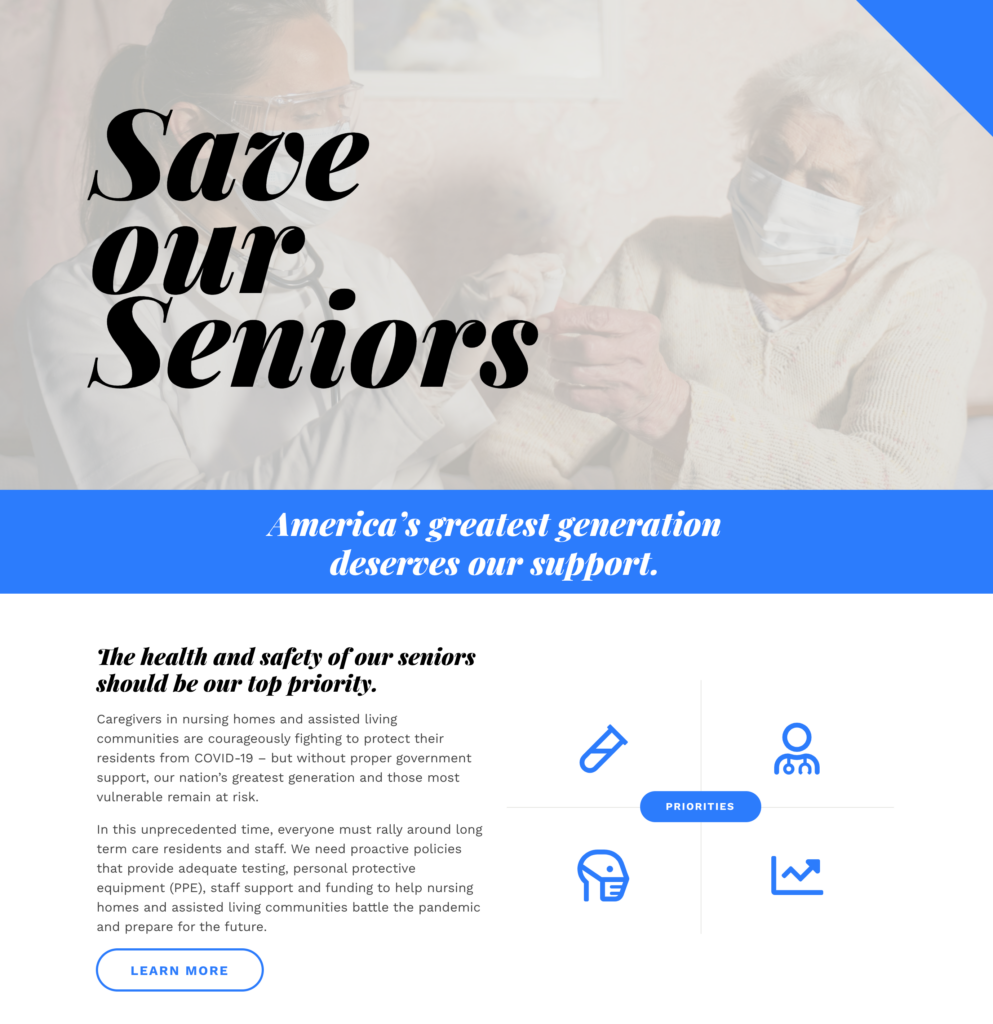 Simultaneously, we launched CareNotCOVID.com allowing the general public to send encouraging messages to nursing home residents and staff and using the hashtag #CareNotCOVID to highlight positive stories of recovery, heroism and community support. 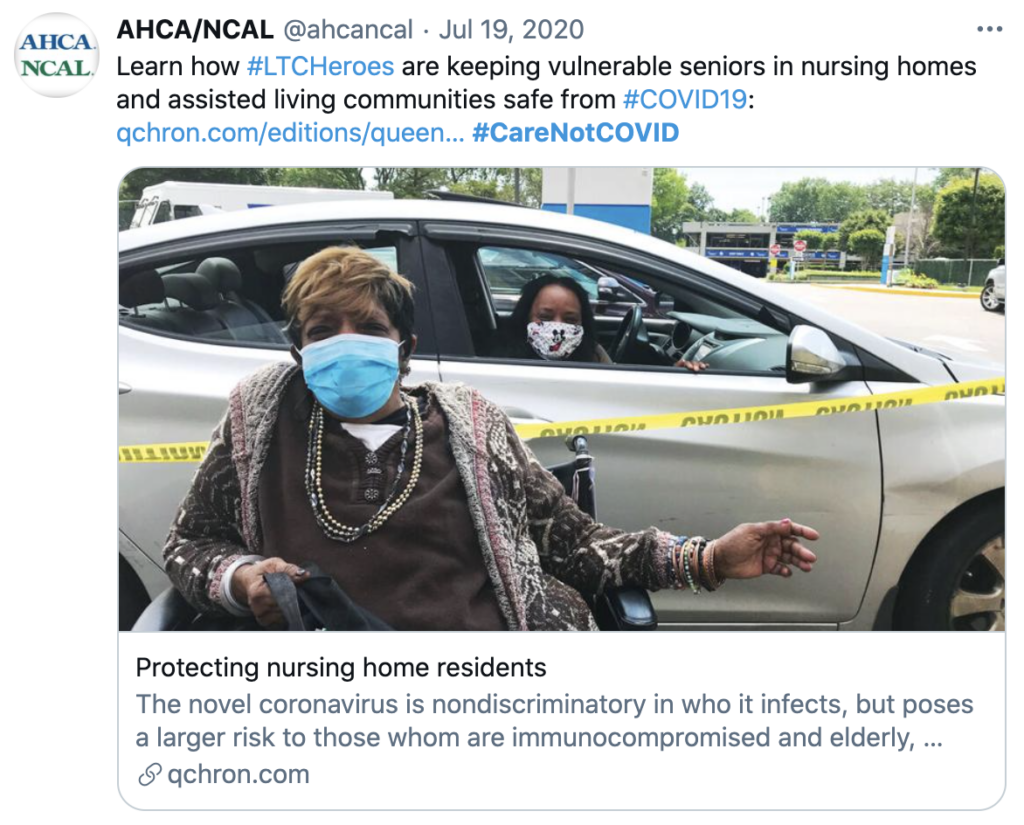 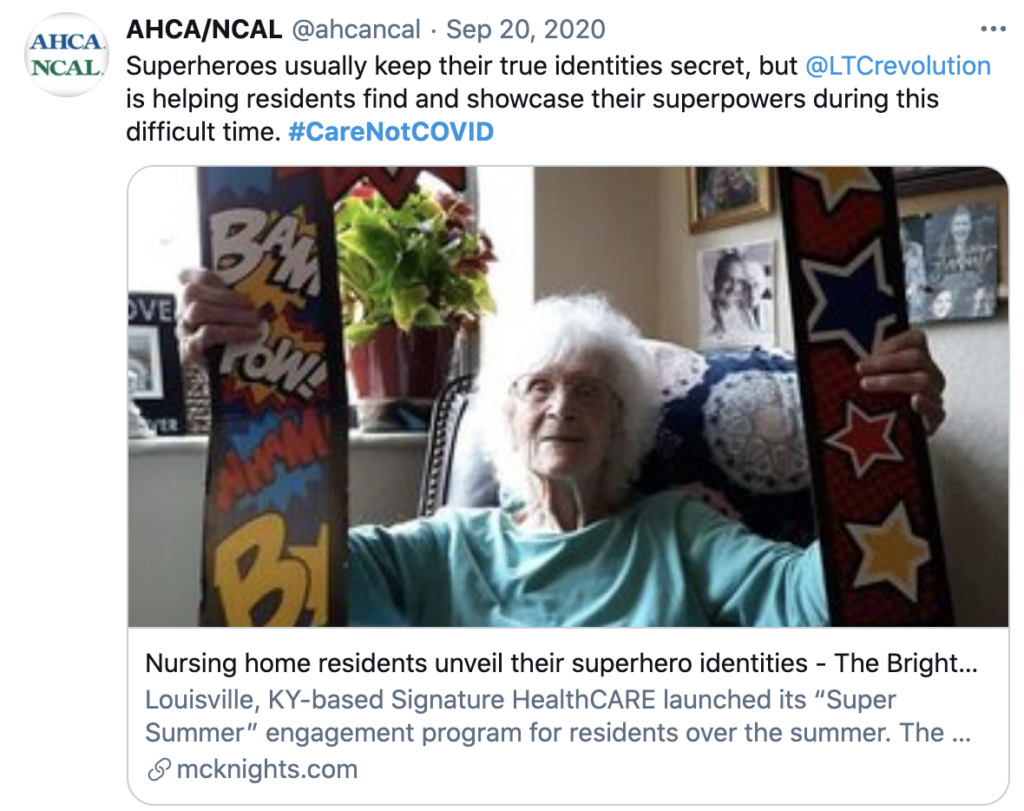 Our effort successfully shaped the narrative around the crisis that long term care facilities were facing by consistently driving the call to action for help from the public health sector. Celebrities such as Jimmy Kimmel, DeMarcus Cousins and Robert DeNiro shared video content related to long-term care communities; CMS Administrator Seema Verma retweeted our content from her feed; #CareNotCOVID garnered more than 10 million impressions and was covered by the Today Show.

When the hotel industry began falling victim to overarching regulations aimed at curbing sexual harassment in hotels, PLUS worked with AHLA to develop a plan to enhance their position on the issue and protect housekeepers without enacting regulations that would put many hoteliers out of business.

TAMKO has been based in Joplin, MO for more than 70 years, and when the company set out to educate the community about TAMKO’s important contributions, they called on PLUS to lead the effort. For two years, we developed a series of personal and emotional advertisements that captured the essence of a family owned business that has grown into the largest independent roofing and building products business in the United States.

When the Grocery Manufacturers Association faced a state law that threatened the entire industry: mandatory labelling of genetically modified products, PLUS stepped in to launch a national awareness campaign to show consumers and lawmakers the disastrous consequences such a law would have. Our work resulted in President Obama signing a bill into law that preempted the state law and was a finalist for PRWeek’s “Best in Public Affairs.”