The Corn Refiners Association (CRA) is the national trade association representing the corn refining industry of the United States. Since 1913, CRA has been the unified voice for the United States corn industry, advocating for science-based public policy and economically-sound decisions at all levels of government.

Corn is frequently viewed as simply a food product, however this mindset overlooks the extreme versatility of the corn kernel and its many uses – from improving the taste of our food and longevity of our cosmetics, to making plastics more environmentally friendly and medicine easier to swallow. The corn kernel is an essential component to products many would never expect, such as tires, fireworks, diapers, golf tees, crayons, self-repairing car paint, and so much more.

We set out to promote this essentialness and versatility across CRA’s target market with a revamped brand identity, marketing collateral, website, and even an updated office space. With CRA’s history dating back to 1913, this challenge presented PLUS Communications with several opportunities to help grow their history and modernize CRA’s approach to conveying the important role corn plays in our lives.

To achieve the goals CRA laid out for us, we began by overhauling their brand and website – bringing everything from the color palette to the design of their homepage up to modern standards.

CRA’s new logo captures the complexity and versatility of the kernel with a simple design. We used a bright and vibrant color palette pulled from actual corn kernels and stalk leaves to shift the focus back to where it matters – the kernel. By placing a single corn kernel at the center of the logo, we used each shade to symbolically represent a different component of the kernel and, in turn, the versatility of corn products.

The new brand served as a launching point to revamp CRA’s full range of collateral and marketing materials – from business cards and email signatures to notepads and corn-based coffee mugs. 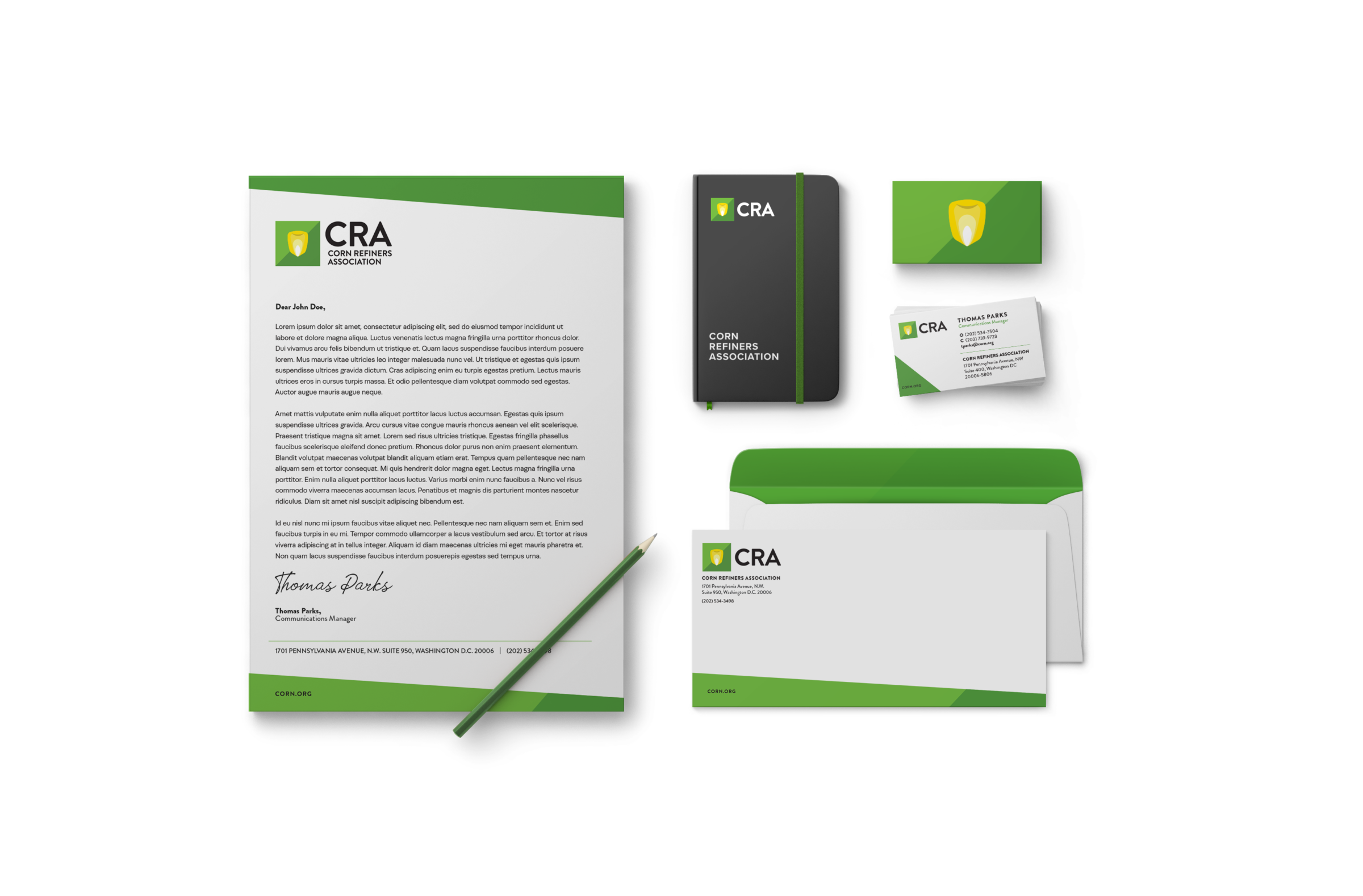 Finally, we worked with CRA to incorporate the new brand elements throughout their office space. Every corner of CRA’s office now fully represents their brand and dedication to corn products – including corn carpet, corn chairs, and an entire wall designed to highlight the multitude of products that contain corn. You can preview their full office space on Corn.org, including the full-size images and wall hangings we designed to complement the look and feel of CRA’s new website. 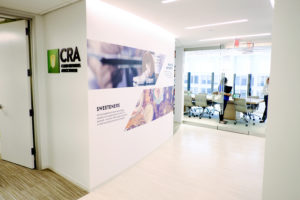 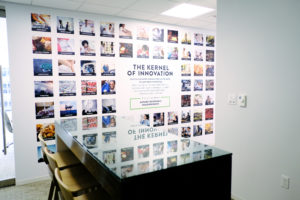 To ensure CRA’s key stakeholders could make full use of the new Corn.org, we started the website development process with a thorough audit of CRA’s digital assets. Our team dug through existing quantifiable data, held focus groups with CRA staff members, and conducted a custom survey for their member companies. These efforts provided us with a broad understanding of the behaviors of some of CRA’s most important users and informed every aspect of the website development process – from initial wireframes to the final product. 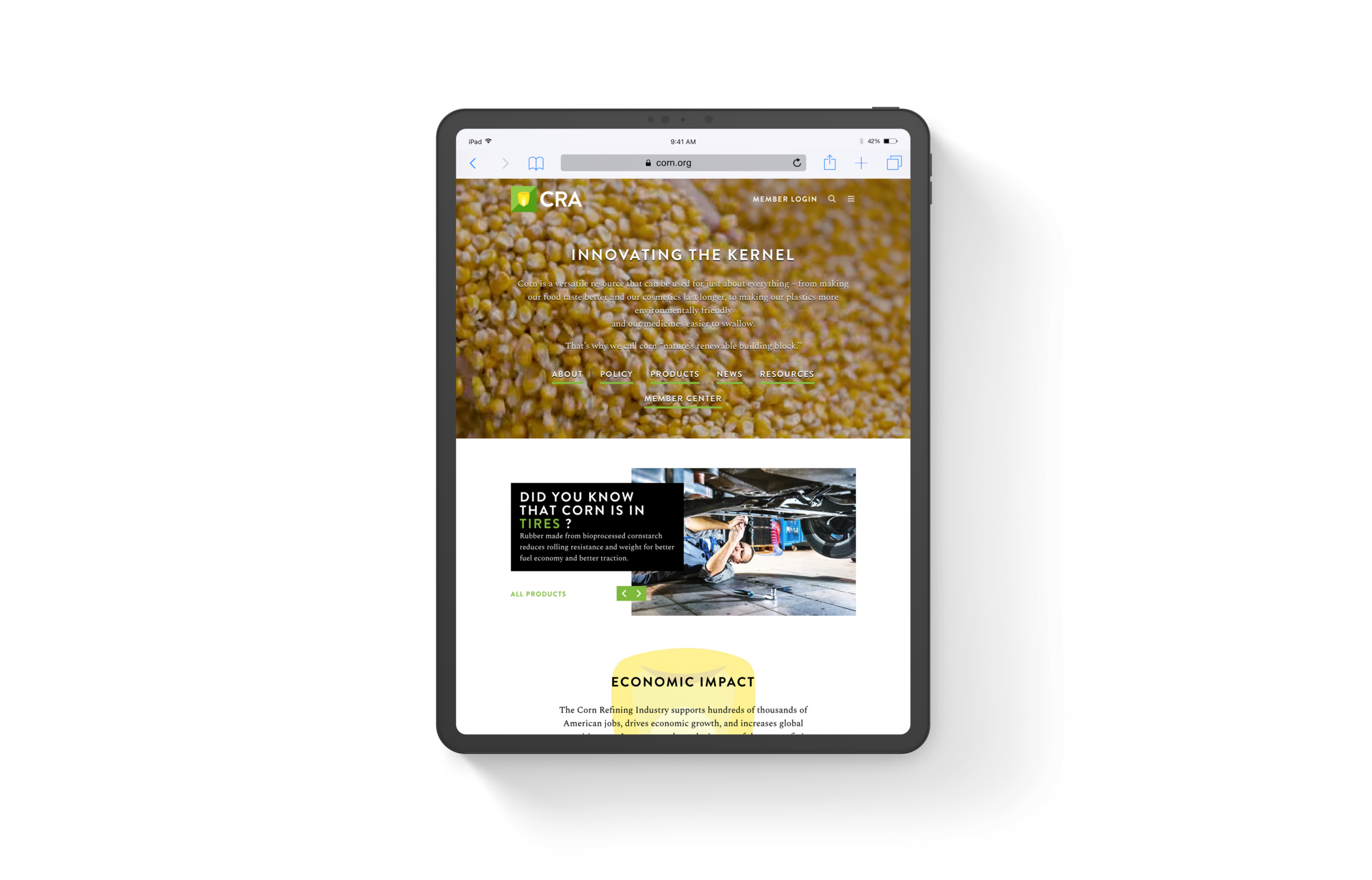 Our research revealed a number of key patterns. First, security and access to important documents were crucial to all stakeholders involved. With that in mind, we added two-factor authentication to secure the website and ensure only trusted individuals could log in. Second, to make content easier to find, we designed a streamlined member section, emphasizing materials specifically requested by CRA’s members. For content that was not confidential, we created a comprehensive resource center that includes all charts, PDFs, reports, and more – utilizing tags and categories to add a level of intentional redundancy to help members, policymakers, and consumers find the information they are looking for.

Finally, to reach our millennial target audience, we developed a section of the website to highlight the Kernel of Innovation, incorporating these “fun facts” throughout the website – from the home page to specific product pages. This bite-sized content is easy to digest and helps educate CRA’s target audiences about the hundreds of products corn is in – allowing them share the fun facts via email or their social media channels.

To strategically build on the momentum of CRA’s new brand and website, we crafted and implemented two separate paid media campaigns.

The first campaign was a month-long effort to highlight CRA’s rebrand amongst members, influencers, and policymakers in DC. We used available interest targeting on advertising platforms to identify influencers and policymakers, and placed tracking pixels on CRA’s website to develop a key remarketing audience of visitors who showed the most interested in CRA and its mission. These tactics allowed us to provide highly-customized messaging across all advertising platforms to each individual audience.

The second campaign was a year-long, nationwide effort to share the benefits of corn with a broader audience of consumers. Using research conducted by one of PLUS Communications partner polling firms, we discovered millennials are very receptive to CRA’s messaging on plant-based products and bioproducts. This finding shaped our content with the primary goal of raising awareness and acquiring new millennial followers. Our tactics included educating our target audience with informational articles, custom graphics of products corn can be found in, and other thoughtful content.

Over the course of 2018, we saw each of our efforts pay off tremendously. CRA’s brand continues to gain recognition across new audiences, their website is engaging more users for longer periods of time, and our paid media efforts dramatically raised awareness of CRA’s vision and mission across our target markets.

CRA’s new brand has solidified their reputation in the industry, and received recognition from members, policymakers, and other key stakeholders. After launching the new brand, CRA gained earned media mentions in Politico, the Hagstrom Report and Agri-Pulse. We even received a mention from MSNBC’s Chuck Todd on a fun segment about candy corn – highlighting the broad impact of the new simple, modern logo.

The new Corn.org has experienced a 54% increase in page visits, with users spending 40% more time on the site. Additionally, users are spending an average of two minutes with our resource center. Finally, the Kernel of Innovation page is the second most visited page, with people spending over 2:30 on the page – demonstrating the effectiveness of our strategy to reach more consumers and educate them about the versatility of corn.

Results from both of our campaigns has been broken out below:

Brand launch campaign: The month-long campaign to promote CRA’s new brand included ads running on Facebook, Twitter, and Google. More than 70,000 unique users were reached in our target audience of members, influencers, and policymakers. Nearly 3,000 clicks were driven to CRA’s website at an average cost-per-click of $1.23, well below the average $1.50 – $3.00 we’ve experienced for similar industry clients. Additionally, digital placements in Politico’s Morning Ag newsletter and across Politico’s website were served more than 140,000 times, resulting in over 180 clicks to CRA’s website.

Ongoing Kernel of Innovation campaign: The ongoing, nationwide campaign has achieved tremendous success in 2018, and will continue to run in the new year. Our research-driven approach has allowed us to reach a tightly-targeted and highly engaged audience of nearly 100,000 unique users, driving more than 3,700 clicks to the website. Since launching in October, CRA’s Facebook page has gone from 0 to over 10,000 likes – hitting 70% of our campaign goal in just three months at an average cost-per-follow of $.98 – well below the average $1.25 – $1.50 we typically experience.

Our strategic approach to the Kernel of Innovation won PLUS Communications and CRA the prestigious Shorty Award for Brand Redesign in May 2019.

The hotel industry has long recognized the critical role it plays in ending the scourge of trafficking, including by providing their employees with training to identify and report instances of human trafficking. Yet, despite this long-standing commitment, there was little public awareness about the industry’s leadership and work to train their employees in trafficking prevention.

With the negotiations for the 2021 CBA beginning to take place, Lisa Marie Riggins, the wife of NFL Hall of Famer John Riggins, approached PLUS with an idea: create a nonprofit organization to launch a national awareness program on the plight pre-93 retirees face to ensure their needs are addressed in the 2021 CBA.

When Charter Communications sought to merge with Time Warner Cable and acquire Bright House Networks, they faced an uphill regulatory battle. PLUS helped seal regulatory approval for the merger and acquisition by showcasing the world of benefits the deal would bring to consumers. As a result of our work, PLUS was a finalist for PRWeek’s “Best in Public Affairs” award.