The Grocery Manufacturers Association is the leading trade association and voice of food, beverage and consumer product companies including Hormell, PepsiCo, The Coca-Cola Company, Monsanto and Conagra Brands.

On May 8, 2014, Vermont Governor Peter Shumlin signed into law Act 120, legislation that mandated the labeling of foods made with genetically modified organisms (GMOs). America’s food and agriculture community, led by the Grocery Manufacturers Association (GMA), united in opposition to Vermont’s law, arguing that a patchwork of state-by-state labeling mandates would create chaos in the marketplace, raise food prices and impede interstate commerce. Anti-GMO activists have been attacking GMOs for over a decade and polling showed that nearly 90 percent of Americans support the mandatory labeling of foods made with GMOs.

The Coalition for Safe Affordable Food (CFSAF) was formed in 2014 to advocate for a uniform, national GMO labeling standard that preempted any state mandates and ensured the federal government-maintained control over a nationally integrated food supply. CFSAF’s goal was the enactment of federal legislation that preempted state labeling laws and created a uniform, national labeling framework for foods made with GMOs. We (hired in August 2014) set out to create an echo chamber of support from a robust and diverse coalition of voices across the country in support of a federal legislative solution. 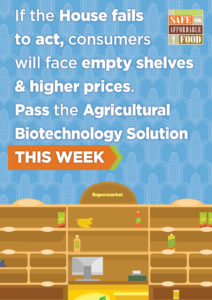 Through grassroots and grasstop activities, earned media, paid advertising and social media engagement, CFSAF aimed to increase pressure on Members of Congress to address this issue and protect America’s farmers, small businesses and consumers from the negative impacts of state labeling laws. Using a comprehensive campaign approach, we created a dynamic and engaged base of support for federal legislation that leveraged the united voice of America’s food producing community to apply pressure on members of Congress through in-person intercepts, letters and phone calls, and targeted earned media placements. In all, our efforts drove over 70,000 emails from supporters into Congressional offices and helped change the terms of the debate.

On July 29, 2016, President Obama signed into law a national bioengineered food disclosure standard that preempts Vermont’s law and creates the consistent, uniform standard that CFSAF fought for since 2014. This followed both chambers of Congress passing the legislation by wide bipartisan margins, 63-30 in the Senate and 306-117 in the House of Representatives. We were publicly recognized for the success of this campaign, taking home an honorable mention from PRWeek’s Best in Public Affairs category in 2017, and named winner of 2017 Public Affairs’ SABRE Award.

When the hotel industry began falling victim to overarching regulations aimed at curbing sexual harassment in hotels, PLUS worked with AHLA to develop a plan to enhance their position on the issue and protect housekeepers without enacting regulations that would put many hoteliers out of business.

In June 2016, House Republican leadership led by Speaker Paul Ryan introduced “A Better Way,” the tax reform blueprint. One of the blueprint’s core tenets was the Border Adjustment Tax (BAT). Americans for Affordable Products (AAP) coalition was formed and served as the main voice of opposition to the BAT. A year after the BAT was introduced, our campaign claimed victory as the BAT’s most adamant sponsors declared it dead.

When the Corn Refiners Association decided it was time to update their brand to better position them to achieve their strategic goals, PLUS’ team managed the entire effort: creating a new logo, website, office materials and much more.